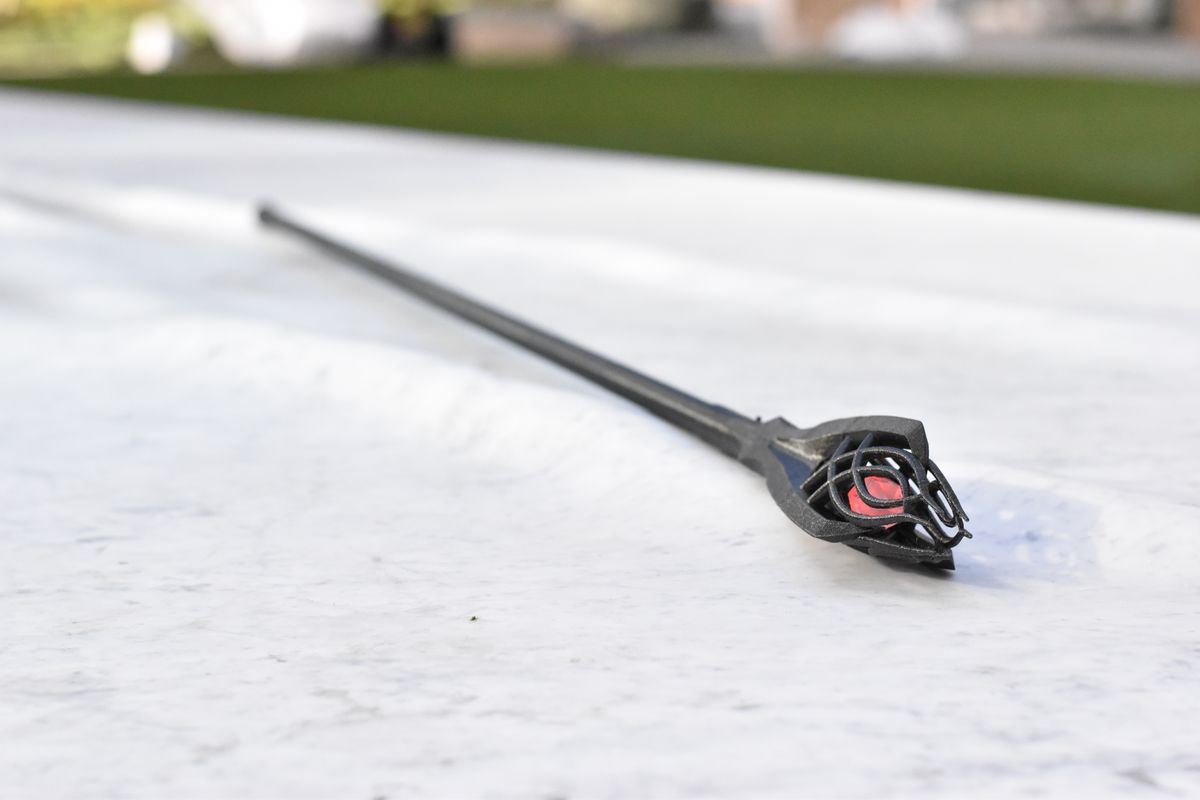 The idea for this project was simple: What can I do with this wonderful crystal I procured from @sehulrburt ? It became an adventure in 3D modeling and iteration -- I finished and iterated until I was happy with it. Read on for a chronicle of this journey!

Recently, I came across @sehurlburt's wonderful crystals, and I figured I had to get one because of a question that I keep finding myself asking over and over again these days: "can I light that up?"

This project ended up being such great practice for Fusion 360. I'm still learning, but I'm now feeling an inkling of confidence around modeling in 3D.

I was trying to figure out what exactly to do with this crystal, and my first instinct was to turn it into a necklace. I measured the width of the crystal and found that measurement can be directly used in Fusion 360 to generate a hexagon. Then, all I had to do was extrude it out and made a hollow shell. Voila, crystal holder!

I then experimented with wire wrapping to attach the crystal to a necklace. I'm no jeweler, so the wrap wasn't too sophisticated, but that was quite fun!

I like it, but I wasn't super happy with it. I wanted something more, something bigger, more epic. Maybe a mage's staff?

So I searched for "staff" on thingiverse, and found this model of Gandalf the White's staff! Perfect. Can't get much more epic than that.

Since I was, in fact, not Gandalf the White, I printed this model with Fillamentum's Vertigo Galaxy PLA (currently my favorite filament). I guesstimated how much I should scale it down to be proportional to the crystal's size – turns out that's around 60%.

Figuring out the rest of the pieces

After I printed out the models, I relied on my trusty caliper to start measuring some crevices. I needed three things:

Since I already had a model that worked well for holding the crystal, I had a base to work with. Using the already-printed staff head parts, and some more guesstimation, I modeled a crystal holder that would be tall enough to look good inside the staff head, and would slot nicely into the bottom half of the staff head.

Next, I needed the body of the staff. I knew it would take too long to print something that would be sufficiently tall enough, so I started looking around a hardware store for what to use. I considered PVC tubes and copper tubes and metal rods and even curtain rods! I ultimately settled for a wooden dowel.

I also decided that I didn't want to paint this dowel. Not only did I not have a well-ventilated space to paint, I also really wanted the entire staff to be the same color throughout.

So, I came up with what I think is a pretty clever trick: I modeled a cylinder based on the diameter of the wooden dowel, and then I printed that cylinder using vase /spiralize mode. Then I just covered the entire dowel with the same filament that I used for the staff head! ✨

The effect is quite seamless, unless you look real close. I was able to get this 3D printed sleeve to fit quite nicely, very satisfying.

I needed something to connect the head to the body, given that the wooden dowel I chose was a bit too thin. So I modeled a cylinder that would be the exact radius I needed to fit the bottom half of the staff head (this will make sense later on), and would also have a hole that would fit the dowel with enough tolerance. I put a chamfer at the bottom because it looks classy ✨

It eventually also gained a hole for the power switch, though I didn't realize this until after the first print of this part 😅

This staff would probably be hitting the ground a lot, so I modeled a simple bottom piece that I thought would be worthy of an epic mage's staff. This piece was the first time I felt an inkling of competency with Fusion 360. I chamfered and offset and extruded to my heart's content.

Here are all the 3D printed parts I just mentioned above, gently knolled for your viewing pleasure.

Finish it, and then break it.

I actually got all the way done with this project, but I broke it before I could finish the blog post. I was sad about it for a sec, but the great thing about 3d prints is that you can just start over.

Plus, the fact that a few maker twitter friends felt my pain was enough to pick me back up.

After all that modeling, I got to the fun part: putting everything together! I started with the staff head, and here's a preview of how the pieces fit together:

I had to assemble the electronics as I was assembling the staff head, and I have to be honest, it took me a while to decide on how the wires were going to go together. I think I'm getting better about my mental models around wiring, but it still takes a bit of time to plan it out.

I used a slow-fade color changing LED, a 105mAh battery and a switch to be able to turn the light off. I also used a looot of hot glue to secure the LED to the crystal.

I wanted to have a switch to turn the light on and off, and I also wanted some way to recharge the battery. I tried to fit a LiPo charger PCB into the staff neck, but ultimately decided to follow some old programming wisdom: KISS (keep it simple, stupid 😛).  I came up with this wiring, and created a VERY professional looking schematic for your convenience:

The single color-changing LED was not going to drain the 105mAh battery too fast, especially since I could turn it off, so I didn't really need a convenient way of charging. Whenever I needed to, I could just pull out the JST cable from the staff head and stick it onto the charger! Problem solved ✅

Now that the staff head was working, I could finally put everything together!

I'm quite happy with how this turned out! It ended up being about as tall as me, and now I feel like I need a costume to go with it.

Thanks for reading this far. Honestly, this project took a lot longer than I expected. I had to do a lot of thinking about how the pieces were going to fit together. Hopefully over time, as I practice the craft of making, I'll get better at estimating the amount of effort and time it will take. I hope you enjoyed my journey, and I hope you keep on making too! 🎉 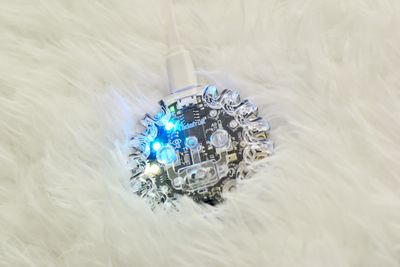